Mazecorp \Since 1999, the work titled "Mazecorps" is reflecting a maze-like construction which refers to the possible relationships between cinema, poestry, and networking. That maze has four starting points, encoded by terms representing witnesses of arbitrary arrests. : "à présent - une arrestation - au matin - une mémoire" ("by now - an arrest - in the morning - a memory"). The arbitrary arrest of the photographic act is noticed for photographies are the key elements of mazecorps' story.

net-art.org is advertisement free. If you would like to support us please Become a Patron!

my boyfriend came back from the war 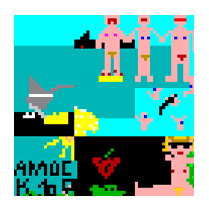