Visual Chaos is a short web work that that explores the idea of chaos on the web. It uses the space of the web as a sculptural space, allowing viewers to interact with animated graphics to delve deeper and deeper into an imaginary city. The images are culled from various print media sources. The texts are either found passages from urban theory or specifically written poetic musings on the city. The site explores ideas relating to an abstracted idea of the city. The images depict shadows and bodies. It explores the ideas of being swallowed by the city. Visual Chaos explores grids as a metaphor for the many different paths one can journey down in the modern city. 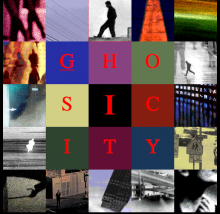 net-art.org is advertisement free. If you would like to support us please Become a Patron!