project_.f.reeP_ project by .-_-.  Battleship Potemkin is a 1925 silent film by Sergei Eisentein, which is in public domain now. For re_potemkin project, Sergei Eisenstein's film 'Battleship Potemkin' was re-produced by 105 students of Yildiz Technical University, faculty of art and design, Basic Design course during December 2006 and January 2007 in 15 groups, following the original shots of Eisenstein using crowdsourcing model. Original script was translated to Turkish from Russian original and English translations. Bilingual intertitles and an original soundtrack was also prepared for the film as well as a project poster and a web site, all using crowdsourcing model. Eisenstein's 'Battleship Potemkin' is in public domain.

The project 're-potemkin' and all the sources including video, music, scripts, intertitles and edits created for this project are also .copyleft!_ and are being distributed through this web site and p2p networks. .crowdsourcing_ .the term crowdsourcing was coined by Jeff Howe in June 2006 and an exhibition was curated by Andrea Grover at apexart, new york in october-november of 2006 called Phantom Captain: Art and Crowdsourcing, exploring some art practices, can be related to the concept but that have been done before the term was coined. re-potemkin is one of the very first art projects that uses the term crowdsourcing and one of the first examples of using the idea of crowdsourcing to make a film. However re_potemkin is better considered as a peer production project rather than crowdsourcing. because corporations see crowdsourcing as an efficient and profitable way of getting the work done (as they see ‰ÛÏopen source‰Û and 'creative commons') and the concept peer production can be thought as in relation to influence for the possibility of another world, as a philosophy like that of free software over open source. re-potemkin is about the influence of the possibility of another world in the age of information technologies and peer production is a term more appropriate to use for it although the project was the very first appropriation of the coined term crowdsourcing. 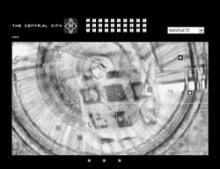 The Central City and other related works.