The project consists of over over 1100 text spaces, 2000 links, 40+ minutes of original soundtrack delivered via Real Audio 3.0, unique hyperlink structures by way of specially-coded Javascripts, a virtual gallery featuring scores of animated and still life images, and more storyworld development than any other narrative created exclusively for the Web. A story about cyberspace, Cabala mysticism, digicash paracurrencies and the evolution of virtual sex in a society afraid to go outside and get in touch with its own nature,

GRAMMATRON depicts a near-future world where stories are no longer conceived for book production but are instead created for a more immersive networked-narrative environment that, taking place on the Net, calls into question how a narrative is composed, published and distributed in the age of digital dissemination.

You can enter GRAMMATRON now or visit the companion theory-guide called Hypertextual Consciousness or, if you prefer, go to The Alt-X Online Publishing Network to see where this all started.

For essays and articles on the developmental process behind GRAMMATRON, see Mark Amerika's Amerika-Online column at Alt-X. 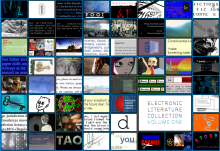