"Qrime is a set of short animations created in part to be shown on the web and some others now modified to be seen as short animations in video. Qrime series express our particular view of the roll of violence in the society and its manifold relationship to human nature. Considering that many of the fundamental motives behind the social problematic of violence in primitive societies seem to be still effective in our times. We have contemplated the words of those authors whose work we think has contributed to the insight into questions of violence as manifested in primitive legends and myths. By depicting each theme from an aggresively digital visual style our goal is to relate the contemporary viewer to the inalterability of his own humanities",

Motomichi Nakamura Qrime.com is as url no longer available.  But the animations are saved by Archiv.digitalcraft.org" 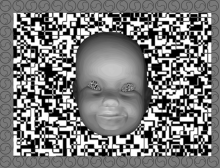 88 Constellations for Wittgenstein: (to be played by the left hand)

88 Constellations for Wittgenstein: (to be played by the left hand)