Geoffrey Lillemon (1981 USA) brings a classic romantic painting and drawing style to technology to reinterpret artistic practice. As one of the leading artists of the Net Art Movement, Lillemon has consistently foregrounded the interplay between the digital and physical world in his work, blending the traditional mediums with interactive animation that responds to human touch, brainwaves, and even heartbeats. Using various art forms, from mixed and moving media to literature and soundscapes to classic portraiture, he creates works of hallucinatory poetry that reach into the infinite depths of the subconscious where the real and the imaginary interact.

Lillemon has exhibited internationally as Oculart, including being the Invite d'Honneur at the Centre Pompidou, was a founding member of studio Champagne Valentine, and is currently an artist in residence at Random, Amsterdam, Netherlands. 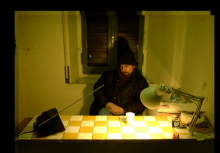