A creepy Magibon fan site Magibon.com It claims to have been created by an obsessive fan named Frank and features a grainy black & white video of a masked man clutching at a wall with Magibon projected on it. Some people speculated that Frank and Magibon were part of an elaborate marketing campaign for a Japanese horror movie, but it turned that Frank was just a viral hoax created by a digital media artist named Danung. 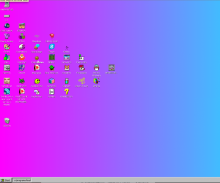 Technologies To The People (TTTP)

Technologies To The People (TTTP)